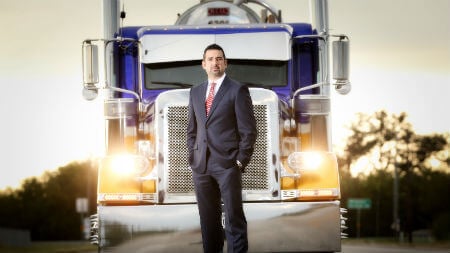 It’s a dangerous world, and anyone can be injured by a devastating vehicle crash, an injury at work, a dog bite or animal attack, or a defective and dangerous consumer product. Everyone, frankly, is at risk, and all it takes is a moment. However, if you or someone you love is injured in an accident in Texas, you may have the right to seek compensation. But a personal injury lawsuit, as you might imagine, can get complicated quickly.

San Antonio trial lawyer Candelario S. Trevino, Jr., gets complicated legal disputes resolved. He fights conscientiously and aggressively for the rights of injury victims and their families in the greater San Antonio area and across the state of Texas. He exclusively represents those who have been injured or who have lost a loved one because of someone else’s negligence.

Candelario S. Trevino, Jr. is an experienced San Antonio personal injury attorney with a long and impressive record of victories on behalf of his clients. Truck accident attorney Trevino was born and raised in San Antonio, and he’s always maintained strong ties to the San Antonio community. He dedicates his legal practice to recovering compensation for victims from insurance companies and from the corporations that are deemed liable for a personal injury.

Making The Difference – On Your Behalf

San Antonio trial lawyer Candelario S. Trevino, Jr., understands how a catastrophic or permanently disabling injury can impact your life, your family, and your future. All of his cases are handled on a contingency fee basis, so when you are represented by Trevino Law Office
, you pay nothing in legal fees until and unless Trevino Law Office
obtains compensation on your behalf.

Your health, your family, and your future are what matter the most, so if you are injured by negligence, or if you lose a loved one, you must be represented by a trustworthy, winning personal injury lawyer. There’s no cost to learn more. You can call Trevino Law Office right now at (210) 255-3088 to schedule a free consultation regarding your legal rights and options as a personal injury victim.